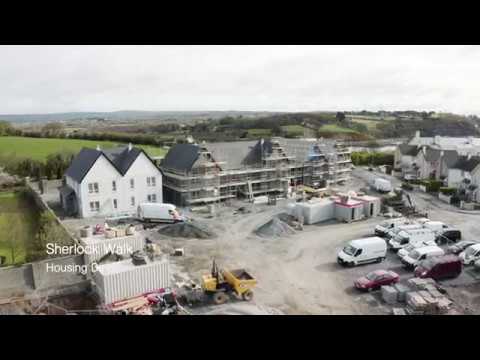 The Borrower is a well-known and respected construction/development firm in the Waterford area. They have requested that we provide them with a €700,000 bridging facility for a period of 7 months (4 months term certain), secured against the Property, which is a site that they are currently developing. The Borrower requires this facility to acquire two further sites in the South East, which they plan on developing. This facility will allow them to move onto these sites immediately after the construction of their existing development at Sherlock Walk.

Lenders will receive of 0.71% per calendar month for this facility, which equates to 8.5% per annum. We will take a charge over the entire site. Initially, our LTGDV (Loan To Gross Development Value) will be 17% rising to a maximum of 57% over the term.

The site we are taking security over is a development site, which is located at Sherlock Walk, approx 2km from Waterford city centre.

The Borrower is building 16 houses and 6 apartments on the site. Work has commenced on site, with construction being at an advanced stage on twelve of the houses (two at final finishes), and work at base level on the final four. The six apartments are at foundation level.

As of the end of March, our QS has confirmed that work to the value of €790k has been completed (see Report attached). Currently, eleven of the houses have gone sale agreed at the marketing price of circa €245,000 with the first four due to complete in May. There is strong interest from investors for the apartments as one sale.

SE Construction (Kent) Ltd are a reputable family owned building firm, who have been operating in the Waterford area since 1970. In the last few years they have completed a number of significant developments such as Cluain Larach, Tramore, Fan Glas, Kilmeaden, and Ard na Groi, Tramore. They propose to use the funds from this loan facility to purchase two further sites in the general Waterford area, which they plan to commence development on in the coming months. Site Management on the Ard Alainn site is controlled by one of the principles of the Borrower. Their architects for this project are John Santry Architects.

The Borrower moved on to the Ard Alainn site in December of last year. As previously stated, the site comprises 16 houses and 6 apartments. Of these, twelve are substantially complete and the four others are at base level. The first four of eleven sale agreeds are due to complete in late May, with the Borrower due to be completed on site by September. The houses are mainly semi-detached with 3 bedrooms, with a guide price of €245,000. The apartments have a guide price of €145,000.

It is proposed to let the LTGDV to rise to 57% during the term of the loan. This will allow the Borrower complete sales during the term of the loan, without using the proceeds to repay the loan. To protect our Lenders position we will still have to sign off on all sales and it has been agreed with the Borrowers that the final two houses and six apartments will only be used to repay the facility. The value of these units equate to €1.23m.

The houses will be A rated houses, with an Air 2 Water heating system. The houses will be c.1,300 sq ft in size, and will have 3 bedrooms and 3 bathrooms, and are aimed at the young family market. The site is located off Gracedieu Road. It is within a short drive of the city centre, the outer ring road and the second river crossing. There are a number of schools in the area including Waterford Educate Together and Gaelscoil na nDeise, and the site is within easy commuting distance of some of the larger employers in the area such as University Hospital Waterford, Sanofi and Westpharma. The units are currently being marketed by Sherry Fitzgerald John Rohan in Waterford and are creating strong demand, as evidenced by the eleven which have gone sale agreed.

The site has received full valid planning permission. This planning was extended as of 01/07/14, under the planning reference is 14/500068. The planning expires on 15/09/19, by which time the development will be substantially complete.

It is proposed to have a term of 7 months on this facility, which will tie in with the completion on the site by the end of September. The Borrower will have the ability to repay the facility after month 4 either partially or in full if there cashflow allows this.

The Borrower has requested a bridging facility of €700,000, secured against a site, with a current value of €1,060,000 and GDV of €4.21m (Ex VAT) These give rise to very conservative rates of LTV and LTGDV (66% & 17% respectively). As we have already highlighted in this report, we will allow the LTGDV to rise to 57%, to allow sales to complete on the site. Over 60% of the houses have gone sale agreed, which gives us additional confidence in taking this site as security for the facility.

The Borrower is a well-regarded builder in the South East, with a history of completing significant housing developments to a high standard.

Given the strength of the security, the quality of the Borrower, and the strong return for our Lenders, we are happy to recommend this facility.

Although all our loans are secured against property, your capital is at risk and returns are dependent on the Irish property market. Estimated returns and past performance are not reliable indicators of future returns. Property Bridges provides due diligence and work with independent professional service firms to ensure your loans are thoroughly assessed and accurately represented. Please read Property Bridges Terms and Conditions for more detailed terms and conditions to which users of propertybridges.com are subject.

Please refer to the Facility Agreement for a full disclosure of terms.

Investors Capital at risk, and investments may go down as well as up. Please refer to our risk section for further information