Let’s work together to build the future.

In 2018 the founders of Property Bridges recognised that the current housing crisis was only getting worse due to the chronic lack of funding in the construction sector. At the same time, interest rates and savings rates were falling to an all-time low across Europe, leaving savers in a tough position.

They knew if they could connect these two groups via an online platform they could unlock the property market for investors and provide a vital source of finance for developers. So they developed an innovative investment platform to turn that concept into a reality.

By 2020, Property Bridges’ community of online investors had funded €10,000,000 in bridging and development finance across Ireland, helping to fund the construction of over 100 family homes. With an annual need of 35,000 homes per year, Property Bridges is a long way from realising its goal of democratising property investment in Ireland 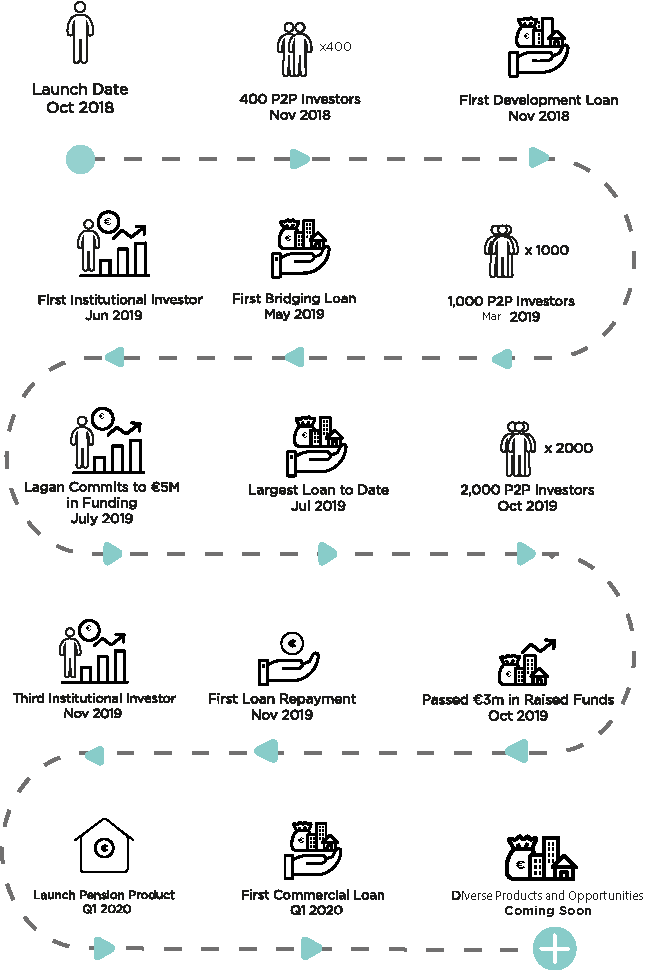 Trusted by Our Partners

Our team are passionate about our mission; providing an alternative source of finance to small to medium sized developers and giving ordinary investors access to great asset backed property loans. Behind the scenes we are building strong processes and improving our technology to meet the needs of our customers.

David graduated from UCD in 2005 and gained experience as a derivatives analyst in the IFSC before moving to London. In London, he spent time as an options trader and equity trader for US investment bank Jefferies international. Upon his return to Dublin in 2013 David joined a financial data startup in Ballsbridge, it was his time here where he developed the concept of launching a P2P lender for the Irish construction market. In October 2018, David launched Property Bridges and completed a Masters in Real Estate in TUD in 2020.

David commenced his career in July 2013 with FBD insurance where he spent 4 years in a variety of sales and client facing roles based out of both Mullingar and Dublin. In August 2017 David joined Willis Towers Watson to head up the growth of their newly established Surety and Bond business. In the role David worked directly with some of the largest developers and main contractors in Ireland. In August 2020 David joined Home Building Finding Ireland (HBFI) as their Senior Business Development Manager. David was tasked with establishing and growing HBFI’s national footprint in the property lending market, especially amongst regional SME builders and Developers outside of Dublin. David also comes from a family business in Construction which he continues to keep a keen interest in.

James commenced his career with AIB Bank working in commercial lending roles in the West Dublin region. He moved to Anglo Irish Private Bank in 2000, where he acted as lending manager for high net worth clients, looking for property investment facilities to purchase  investment properties in Ireland, the UK and Europe. In February 2004, James moved to Anglo Irish Assurance, where he managed a portfolio of property funds, valued at in excess of 2 billion, across over 200 commercial, retail and residential properties, located in Ireland, the UK, Europe, and the USA. In 2014 Anglo Irish Assurance was taken over and became Harcourt Life Assurance.

Conor is a career banker with over 30 years experience in both Irish and International Financial Services Institutions. Throughout this time he has held a number of senior roles, including that of Director of Banking, Chief Credit Officer and HR Director. He has extensive property experience, both from a Banking and Investment perspective. A graduate of University College Galway, Conor holds degrees in both Law and Economics.

Peter has over 25 year’s experience in Controlling finance to Irish businesses of all types and in all parts of the country. He is always happy to discuss proposals with prospective borrowers and to help get projects funded.

Qualified as an International Member of Accountant (AIA), Part qualified (ACCA) with Degree in Law and Accounting, Zilah has almost 10 years of experience in banking and online marketplaces, combining accounting, finance, planning and controlling skills.

Tom has experience of practising as a solicitor on the real estate teams of leading Dublin law firms. He holds a BCL from University College Dublin and has undertaken an MSc in Real Estate at Technology University Dublin (formerly DIT).

Are you looking to take the next step in your career?

We are always on the look out for motivated team players with a positive
disposition and a hard work ethic.

Important Disclosure: Although all our loans are secured against property, your capital is at risk and returns are dependent on the Irish property market. Estimated returns and past performance are not reliable indicators of future returns. Property Bridges provides due diligence and work with the independent professional service firms to ensure your loans are thoroughly assessed and accurately represented. Please read Property Bridges Terms and Conditions for more detailed terms and conditions to which users of propertybridges.com are subject.